This is the first in a three-part series featuring community partnerships. This installment shares a relationship with the South Sound YMCA. 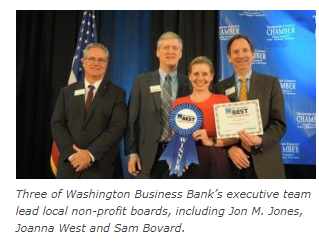 Moving to a new town can be a challenge, especially when you’re simultaneously taking on the executive directorship of a well-known and much-loved non-profit organization. When Kyle Cronk took over the leadership of the South Sound YMCA last year, Board Chair Jon M. Jones played a critical role in his transition. “He helped me navigate a new community,” says Cronk. “It seemed like everywhere I went on the non-profit circuit; there was always a friendly face from Washington Business Bank in the room. It made it easier to get connected.”

For a company with just 15 employees, Washington Business Bank has a powerful impact on the community. Aside from Jones, two other members of its executive team have leadership positions with local non-profits; Vice President and Business Relationship Manager Sam Bovard is Board Chair (as of January) of the Boys & Girls Clubs of Thurston County, and Vice President and Marketing Director Joanna West serves as Chair of the Board of Trustees of the Thurston County Chamber of Commerce.

“It’s unusual for an organization of our size,” says Jones. “It shows our commitment to the community and to the organizations we’ve all been involved in for many years.”

Jones has always been interested in health and fitness and had a personal connection to the YMCA. “I had gone to Y camp when I was little and my kids learned to swim there and have participated in a lot of youth sports. This is something that has really touched my family,” he says. “When I was asked to be on the board, I thought it would be a great fit.”

Like many people, Jones had a perception of the Y that he calls ‘swim and gym.’ “That certainly is part of it, but as I became more involved, I learned that there’s so much more we do,” he says. “There’s licensed after-school care, youth sports, achievement gap programming as well as 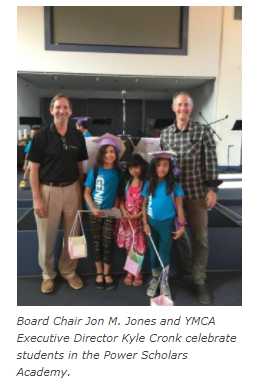 programs for diabetics and cancer survivors. According to Thurston County EDC, the Y is the 8th largest employer in our region. It’s been eye-opening how far-reaching the organization is.”

Cronk credits Jones for leading the Y through a recent strategic planning process and arriving at the historic decision to move their downtown headquarters. “One of the first things we did was to implement a strategic plan that included looking at how we’re governed,” he says. “We’ve

had three different operating units, each with its own advisory board that reports to the board of trustees. We needed a way for everyone to understand what everyone else is doing.”

Jones put together a group of representatives from each of those boards who spent months exploring the governing structures of other YMCAs and non-profits. “His leadership was critical in getting those groups together to go to other volunteer board meetings,” says Cronk. “The process created a new level of trust, transparency, and accountability.”

Transparency was vital when it came time to decide the future of the downtown YMCA facility, which has been in existence for 108 years. “A lot of people ha

ve a connection to it and we knew that we could not take the decision lightly,” says Cronk. Ultimately, the board opted to acquire the present 5th Avenue Fitness Center membership on Plum St. as the new downtown headquarters.

While that decision was significant, Jones also provides support with minor issues, says Cronk. “Sometimes you run into challenges that are business-focused and it’s important to make sure the trustees are aware and involved. Jon has been a real proponent of the idea that the more we can share with the board, the better. That helps them to be good advocates of the Y.”

For his part, Jones enjoys using his business acumen for a different purpose. “One of the great things about being a banker is you get to do things that help businesses be more successful. Throughout my career, that’s always been one of my favorite things,” he says. “But with this type of organization, it’s affecting people’s lives in a different way. It may be helping somebody work their way through cancer or being there for a child after school and giving them a safe place to study. It’s very rewarding.”

One example is the Power Scholars Academy, a newer program at the Y that tackles the learning loss that occurs during the summer months for many students. “We’ve been able to measure success,” says Jones. “I’ve been to two graduations. When I see the kids and how much work they’ve put in and how excited they are, I think, ‘This is why I do this.’” 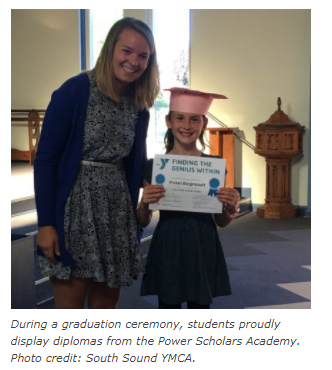 Jones believes his involvement with organizations like the Y only strengthens what he brings to Washington Business Bank. “This is a relationship industry,” he says. “People see you not just as a person but as a representative of an organization with a strong commitment to the community. In this town, that matters.”

Those connections are part of Jones’ strength as a leader, says Cronk. “He knows everybody in town, which makes a difference when we want to develop our board and recruit new members. We’ve made a promise to help the Y grow and strengthen. Together, we’ll do great work.”

Posted in News
Scroll To Top Skip to content